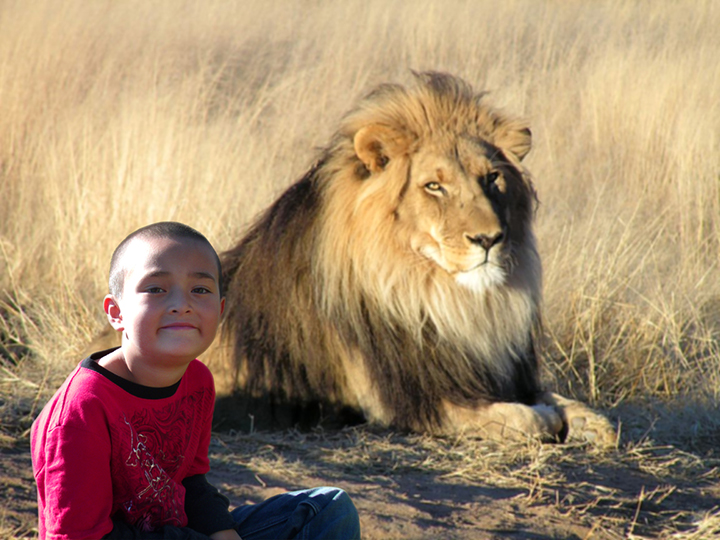 Today I wanted to write about a common topic that many artists, designers and photographers seem to struggle with … Isolating photos.

Quite often I see over-feathering, poorly drawn traces from using Photoshop’s lasso tools, jagged edges from the wand tool, and even missing appendages. The process that I use is a careful trace using the pen tool, this will give the artist or designer the maximum control over their photo isolation and ensure that it looks great (or at least better).

We’ll use this photograph of my Lucas from Rocktober in Richfield, UT. Your workspace isn’t going to matter too much, in fact anyone who’s ever tried to work on my computers knows that I really mess up my workspace. Quite often getting rid of all of the toolbars to open up additional real estate and use the hotkeys to accomplish most things. If there’s one tip that I can give to any artist or designer to increase productivity is LEARN YOUR HOTKEYS, I promise you’ll be at least twice as productive.

Another big increase in productivity is to get yourself a Wacom tablet. I don’t care if you never have to draw, paint or you spend all day in Microsoft Word; the increase in productivity that I’ve seen in everything from building pages in InDesign to illustrating speaks for itself. Even a cheap or older tablet will increase your speed, guaranteed. Drawing a line is faster and much more natural than clicking and dragging a mouse (plus, you might notice your hands and wrists being less sore at the end of the day. I use an Intuos 3 at home and a Bamboo Pen & Touch at The Reaper (I’m sure you can get an Intuos 3 for under $100)

The first thing we’ll do is jump into fullscreen (ff). I have my first button set to pan/scroll so I can move around the photograph quickly and easily. Switch to your pen tool and create your first point either at the edge of the photograph or if there are no edges I start at the straightest line.

Remember that if you click it creates one point, if you click and drag it creates what’s known as a bézier curve, a point with “handles” that create a curved line. While drawing your path focus on making frequent, shorter curves, this will make it easier and your isolation will look more natural.

Hair will take up a majority of your time, sometimes it’s important to just focus on the larger clumps that are sticking out. Don’t worry about them all, as long as you get a majority of them your isolation will look pretty natural.

One thing worth noting is that most consumer cameras are going to shoot in a compressed .jpg format. This is going to create some extra dithering around edges. Notice in the photo here that there are maybe 5-6 pixels that are neither the background grass, or his ear. Try to create your path where the pixels are mostly the object you’re isolating. That green would not look good around the edges of my buddy where he’s about to go.

When you get done close your path by tapping on the very first point you created. With the pen tool selected right click (my top pen button) on the photo … at this point I almost always make selection but, for many artists it would be more appropriate to create a vector mask. I’m going to make selection by right clicking (my top pen button) and then duplicate layer (cmd/ctrl+j) then I’ll delete the background layer.

To get Lucas to Africa I’m going to select all (cmd/ctrl+a) and copy (cmd/ctrl+c) switch to the lion photo from wikipedia and paste (cmd/ctrl+v).

Obviously these two photographs were taken under extremely different lighting conditions, environments and cameras, so it’s not going to look very natural. To get this to … kind of work I flipped the lion photo so that the light was going at least somewhat in the right direction. Played with the hue and saturation (cmd/ctrl+u) and levels (cmd/ctrl+l) to get the lighting and color cast to look a bit more natural. Then used a lens blur because as far back as the lion is and as far forward as Lucas is, there is no way they’d both be in focus. Then I selected the transparent pixels on the layer with Lucas with the wand tool (w) and feathered him (shift+f6) by 2 pixels because the edges didn’t look very natural. I always feather AFTER placing the photo where it’s going, that way you aren’t going back 30 times when you realize that you feathered too much or too little.

There are quite a few things you could do to make this look more natural with multiple layers and some adjustment masks but, that is outside of the scope of this tutorial. Please leave any questions or comments below, and like/share this if you found it helpful. Thanks all!