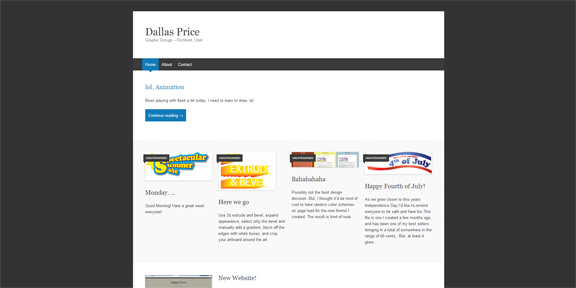 Ugh, I’ve had a fun filled day. My daughter’s fifth birthday. I always hate it when there’s like 60 billion people running around me, everyone yelling over each other/squealing/giggling/fighting. I start getting nervous and grouchy about 2 hours before anyone even shows up … lol. Not to mention the goddamn construction, I mean … Them moving my water meter and outside tap twice wasn’t enough. They start doing really stupid crap to piss me off. First the concrete company (Riverstone) Busted the damn pvc tube that I’m now supposed to access the valve through, and this morning some idiot contractors covered it, and my water meter with dirt. Ugh, beyond over this construction.

But, On the bright side, I noticed that I’m getting some visitors 🙂 So, I gave up on the journey of making my own theme. It was fun, but I couldn’t figure out some of the little quirks and issues and I didn’t want people to have to suffer the ugly layout of the site. I think this new one works really well with what I want this site to do and, I can focus more on creating content.

I haven’t had any new sales I don’t think since my last post. I’m slowly working on a new file for fall. Which is kind of exciting by itself because, I pulled out a pencil, and some paper and decided to sketch out this idea. I used to draw quite a bit, and haven’t at all since probably sophomore year in High School (I got a computer so who needs to draw, right). But, anyhow I think it’ll be kind of neat. Even if it looks like crap it could hopefully open the door for some new ideas and inspiration. Silly for me to try so hard for the 18 cents per download but, maybe someday …

Anyhow, thanks for reading.