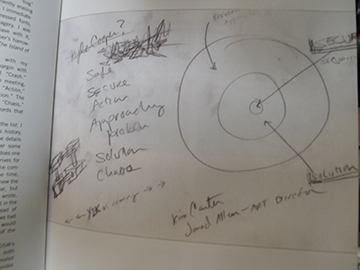 It’s already been a long week, and I’m super excited that I’ve got my portfolio up and everything. I can focus on doing some illustrations and blog posts n such 🙂 I couldn’t really think of a post for today, but I thought an update was probably due.

Communication is an idea we toss around quite a bit at The Richfield Reaper, and they’re probably tired of that word. In daily life communication is pretty important for everyone. But, it can be particularly difficult for a graphic artist. According to Merriam-Webster, communication is the act or process of using words, sounds, signs, or behaviors to express or exchange information or to express your ideas, thoughts, feelings, etc., to someone else.

As designers, we don’t work in vacuums. We’re not fine artists, with only our genius to answer to. We generally have the needs of someone else, often a huge corporation, to consider. Often the most invisible aspect of any design job is your client’s desires.
-Hillman Curtis, MTIV

Hopefully, you can see where I’m coming from. Communicating ideas can become even more difficult the more people are involved in that line of communication. Quite often the message can become lost entirely. One important thing to remember is that everything you do is a communication. Everything you wear, how you look, your body language, what you say, don’t say … what you create. Sometimes it’s easy to lose the message. Quite often I’ll grab an advertisement to build, and it’ll be entirely drawn out. Well, at first I thought “well, why didn’t you just do it”. However, after a while I came to realize, that’s not what the salesperson wants. In fact, most of the time you’ll be rebuilding it if you try to make it look like the sketch. As much as I’d rather see something like the sketch to the left. I’m probably not going to ever get it. The salesperson might not know what the most important thing is, hell sometimes the client doesn’t even know. That’s why it’s important to find out, or how will you ever going to communicate it.

A common mistake of designers is thinking of themselves only as visual communicators. We’re fortunate to speak the visual language fluently, but we also need to translate literal and thematic messages. In other words, we need to be bilingual.
-Hillman Curtis, MTIV

You see, just like everyone else … The salespeople are trying to COMMUNICATE. But, they’re trying to communicate directly to me what the client wants me to communicate to their customers. Many times, you’re searching for an invisible message in the scribbles and .doc files. What is important for this company, what are we selling? Is there a particular look and feel of this companies advertisements. A theme?

Questions, what the hell are they for? Sometimes it can be handy to ask yourself questions (maybe in your head or people might think you’re losing it). It can be quite helpful to ask your colleagues and clients questions. Especially if putting off the question could result in wasted time or a failed design. But, don’t forget to listen. If you’re shutting yourself off as a designer, from anything, sights, sounds, feelings, emotions, art; you are seriously limiting your creativity. I’m sure that everyone allows they’re emotions to shut them off from time to time.

To take more advice from Hillman Curtis, EVERYTHING is inspirational, and in this world sometimes inspiration can be hard to find. It’s easy to become jealous when seeing great work from others. But, that doesn’t help at all. Try taking what you like about it, and use it for yourself. Breaking down your pride can be hard, and who doesn’t want to be proud of their work. Sometimes it can stand in the way of communication though. I hate hearing a client or salesperson saying the dreaded “I don’t like it” or similar. But, if you’re allowing yourself to remain open to feedback and ideas, you’ll end up with a better design overall. A better communication and something to be proud of.