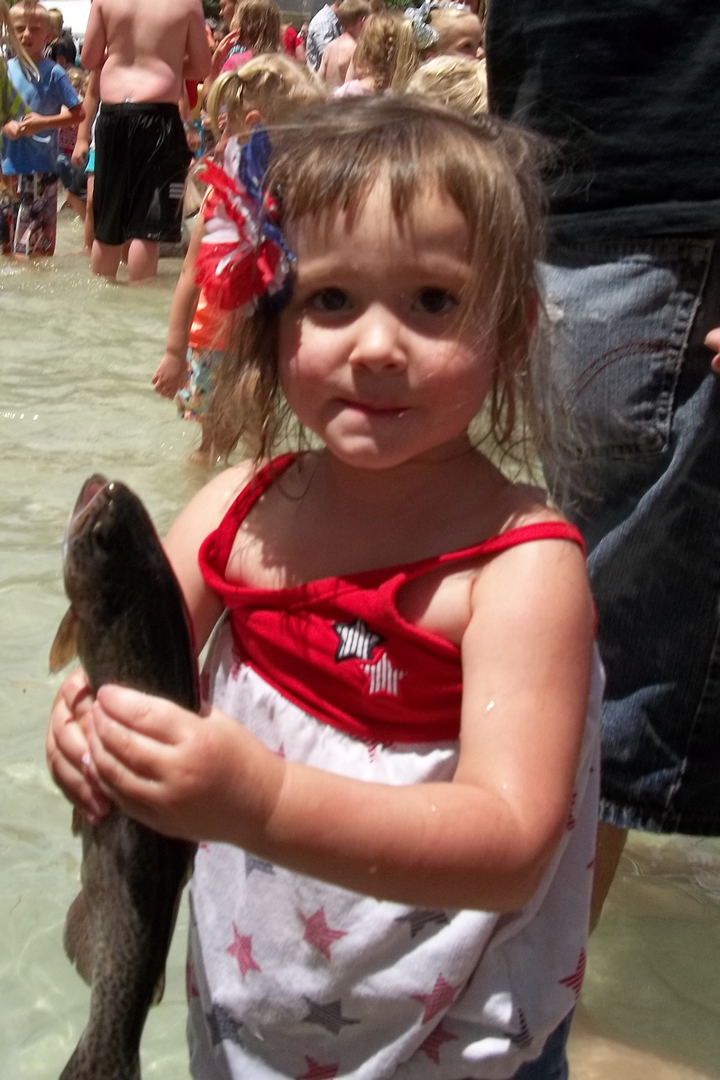 What a great local tradition, at approximately 12:40 P.M. Yesterday, July the 4th. I packed up my two youngest girls to head over to the fish grab. After finding a parking spot approximately 17 miles away from the city park I realized that the baby had purposely dumped her sippie cup all over herself. Of course I wouldn’t bring a stroller to such an event. I get the girls out of the Air Conditioned truck to begin our journey. After walking the block and a half we find our destination, an overly crowded area with shallow pools of soon to be mayhem. I get my little boog to take off her flippie floppies and urge her to get up into the area where the other kids are patiently waiting.

The next while was moderately panic filled, as I couldn’t see her at all with all of the parents and grandparents but, I assured myself that she’d be fine. Every decade in that hot sun the announcer would cheer that it would be ready in just a couple of minutes.

Once the kids were allowed in, I still couldn’t see her. “She’s got to be in there with the other kids”, frantically trying to snap pictures above the other peoples heads. About the time I had decided that I might need to use slenderness and pointy elbows the same way as customary when getting your spot at a rock concert, people started moving overjoyed with their offspring’s catch of a nasty, smelly little trout. With a few people cleared I could see most of the pool (depending on which way people turned their heads), still wondering where in the hell my daughter went I started looking around wondering if maybe she had gotten her fish and gotten out. Hell, maybe she decided she was done and headed for the truck, or worse home. In almost a frantic nature I’m still taking pictures of the pool hoping that I’d catch a photo of her, while looking around hoping that I’d actually see her, when I notice this little one crying about 10 feet away. I thought, “Well who in the world would let their little girl out here naked. I mean, we all know what white undees are going to do once she gets in that water. Ugh … Still no sign of her, this isn’t good. Maybe I can spot her flower bow on top of her head. Why isn’t someone helping this crying little girl, WAIT A SECOND …”

“Khryslee, where in the hell are your clothes?” I exclaimed, scaring the entire Richfield City Park … she just continues crying “bish, bish” while making the sign for fish. “great, sweaty nasty baby on my shoulders ripping my eyes and hair out, now I’m going to have to pack little miss PTSD out of here because someone put fish in her pool” I thought.

“I know there’s fish, that’s the point. Don’t you want to catch one?” Pants, ah hah, right there next to the pool under everyone’s feet, got em. Shirt, 10 feet the other direction … under everyone’s feet. As soon as her clothes are on she’s off … Tugging on some random ladies’ clothing as if to say “throw me back in coach” at this point I think all of the fish had died from shock, or maybe being stomped on or mangled by children … they are all floating lifeless. She grabs the first one she sees, and they hand her a bag to stuff it in.