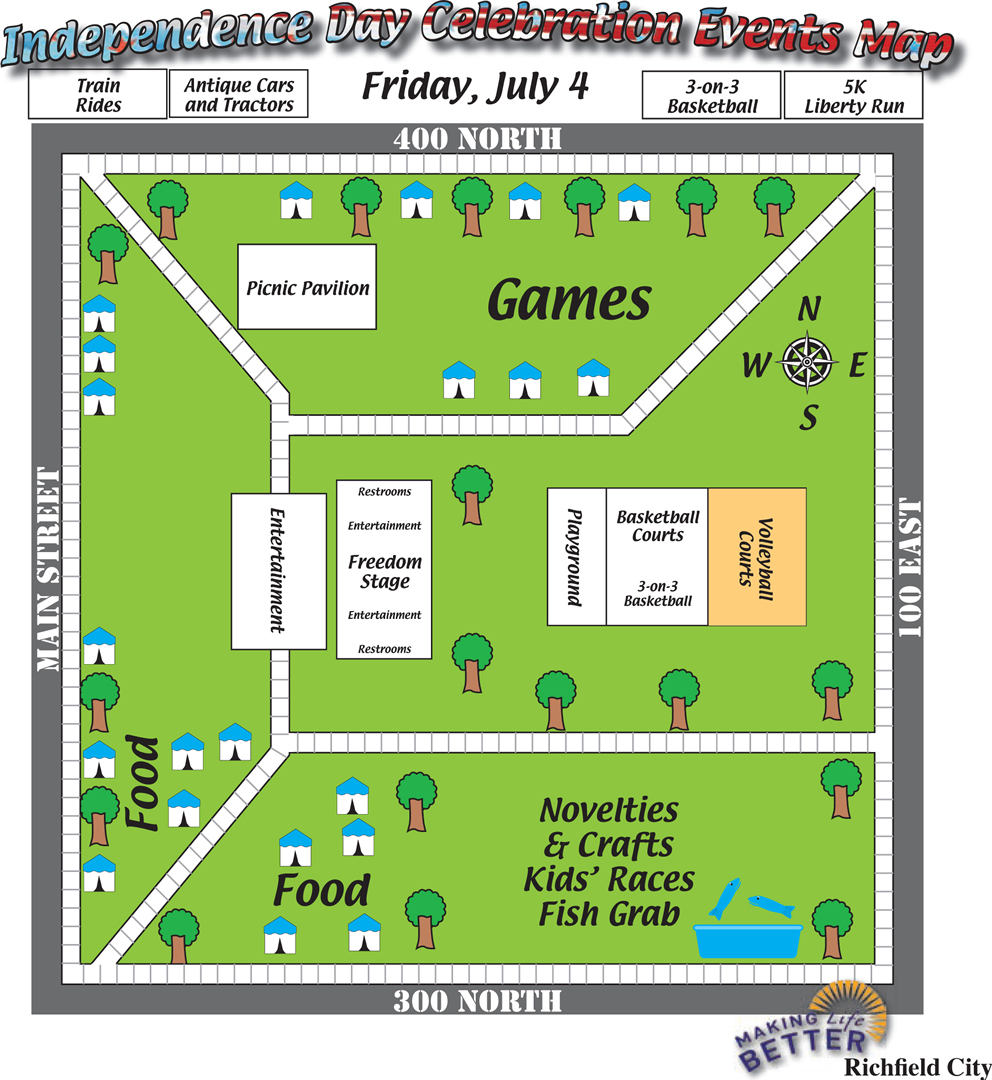 Well guys, Independence day is here again. Last year I wrote a short post about one of my illustrations and the cover design for the Independence Day guide that The Reaper does every year but, I didn’t do the cover this year. I did however redesign the map for the events held at Richfield City Park. At first I was going to go with the same concept of the old map but, I thought it was a little bland. (also, the old one was a 305mb photoshop .eps file, which was difficult to work with)

It was late on a Monday when I got started on it, and I have a tendency to get carried away on things like this. What started as strokes for the sidewalk turned into sidewalks, what started as little green blobs that were trees turned into trees, and the icons for the booths turned into tents. One of the more interesting parts of this map was including the fish grab. For those of you that aren’t from a little redneck town in the middle of nowhere, a fish grab is where all of us hillbillies gather around and have our offspring fight to grab trout out of a pool. This was a huge controversy this year as it was almost cancelled. Between animal rights people, volunteers and sponsors, someone somewhere thought we didn’t need it. I couldn’t find the original controversy but, David Andersons article is pretty good read.

On a blistering, hot day, there’s nothing quite as refreshing as being smacked in the face with a warm trout.

So naturally I wanted to toy with ideas while incorporating the fish grab but, for some reason they wouldn’t let me get away with the dead fish laying there on the grass.

While doing this map I paid special attention to the colors and seperations, making sure that the only things that seperated were things that had to (grass and trees). The only thing I don’t like about this design is the header, it’s just too much … hard to read.

On the subject of design, WOW. If you missed this ad you’re probably blind, it’s enough to give common people a seizure. With that said, the original one that I sent was pretty boring, she wanted it “more festive” So naturally I had to do something a bit over the top.

Sometimes it’s really difficult designing in black and white. The photo of a pie (we’ve used multiple times) is really difficult to see or tell what it is, I think to be more effective it could be a pie with a slice cut out or something. I mean, you can’t even tell what that blob of crap is. Both the salesperson and client were happy with this though and I suppose I can’t complain much.

I don’t really have much to say about this one, I like smaller logos and the leading could have been increased between events. Satterwhite wanted their logo bigger and in the center though, and who can blame them when sponsoring the schedule of events.