Well, I think summer has finally found Utah. Mostly I’ve been working and wasting time all week. Now, that I’ve wasted most of my weekend, I thought I ought to get … last weeks post done, well I’m 4 days late anyhow.

Apparently, they have some construction going on down at Jorgensen Ford. They had the parking lot all torn up and wanted to get rid of some inventory. The layout on this one is a bit odd, I was trying to piece together the information from an advertisement a few weeks ago, and one from earlier in the year, and do it in a hurry as always. Nevertheless I’m sure this was an effective advertisement and I’m sure the Jorgensen guys moved some cars.

Simple and effective. The more simply you can design something the better. People have a very short attention span. More true now than ever.

Write the story, take out all the good lines, and see if it still works.
-Ernest Hemingway

To relate another fantastic Hemingway quote to graphic design, if you can’t justify having a specific graphic or line of type in your advertisement. There’s no reason for it to be there. Think of the goal of the ad, it’s main purpose, and build a theme around it. Quite often you could find yourself saying “Well that’s stupid the goal is to sell blah blah blah” But, everything, every business, and every communication they send out has a theme. The desire to sell of course but, what are they trying to communicate.

Starbursts! There are some people in the newspaper industry that hate starbursts. Actually, they’re probably frowned upon in advertising as a whole. The reason you keep seeing them however, is that they are an effective way of displaying little “wow” information bits like in this weeks Grako’s ad. I mean, free stuff will catch almost anyone’s attention (did I mention the clearance sale). Yes, I’m sure that I could have done this without the starbursts but, FREE … free needs to jump right out and smack your face. So starbursts, while they can make your advertisement appear cheap or even gaudy, are effective. Just use them sparingly and as with everything, if you can’t justify having them, take them out.

I wanted to mention that I still have 3 spots (could be 2 by the end of next week) available for hosting. I can host your website for as little as $20 per month. If you want continued support and maintenance I can host your site for as little as $30 depending on complexity and your needs. Site designs start at $100. My hosting has unlimited storage and unlimited bandwidth, so quite realistically anything is possible. Also, any other design work and some Computer Repair is welcome. 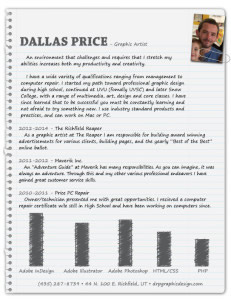 I’ve received tons of great feedback on my resume. I’m trying to reflect my personality and experience as much as I can, while some of the feedback I used, some of the other I’ve brushed aside. I am still wondering about a font, if anyone has any good suggestions.